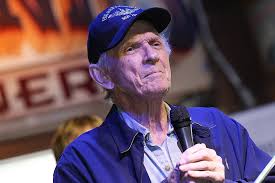 Read on The Tennessean

Fans, friends and family members gathered at the Ryman Auditorium Wednesday morning to celebrate the life of country music great Mel Tillis, who died Nov. 19 at the age of 85.

This was the third memorial held in Tillis’ honor in the last two months — private funerals were held in Clarksville and his native Florida in the days after his death, while the event at the Ryman was open to the public and broadcast on 650 AM WSM — which seems only fitting when considering the substantial impact Mel Tillis had on country music.

Steve and Rudy Gatlin perform with Pam Tillis at the public memorial service for Pam’s father Mel Tillis at the Ryman Wednesday Jan. 31, 2018, in Nashville, Tenn  Larry McCormack / The Tennessean

Known for his down-home humor and his stutter, he recorded more than 30 Top 10 singles, and penned some of the genre’s finest songs during his 60-year career as a singer, songwriter, actor and businessman.

Several of those songs were sung on the Ryman stage Wednesday morning. Lorrie Morgan performed “Strange,” a Tillis co-write recorded by Patsy Cline in the early 1960s, Ricky Skaggs delivered his 1984 No. 1 hit “Honey (Open That Door)” and Alison Krauss, joined by a cappella outfit Street Corner Symphony, performed “Stick with Me, Baby,” a Tillis composition that she and rock legend Robert Plant recorded for their 2007 album “Raising Sand.”

But Tillis’ impact can’t just be measured by hit songs or Hall of Fame inductions. Multiple speakers, including Trick Pony’s Ira Dean and Kenyon Lockry, described a few of Tillis’ kindnesses, from helping records get made to sharing a few pre-concert cans of Old Milwaukee to bestowing advice like, “Say just enough, and stop talking before they find out how stupid you are.”

When eulogizing her father, singer Pam Tillis remembered how, as a little girl, she’d tag along with her father to his publishing company. When she got tired, he’d plop her in his guitar case for a nap. “He gave me a life in music,” she said, “and it was incredible.”

Tillis and her siblings then led the room in “Detroit City,” a song that their father often used to close his shows, and, just like he did at countless shows, asked everyone to stand up and sing the chorus: “I want to go home, Oh Lord, I want to go home.”